Kenny had only been out of the Army for a short time. He was working for the company. I had a 1976 Chevy 4 Wheel Drive Pickup that I handed down to him.

We had a project installing a new waterline that extended from near Mesa Dr, along Far West Blvd. The line would end near FM 2222 and Bull Creek Rd. This was Kenny’s project to oversee. We were for the first time living a role reversal, where I was his boss.

I made an early morning drive by to check the progress and didn’t see Kenny anywhere, even though it was well past start time. I called him on the radio to inquire. Before he responded with his location he ask where I was. I told him and he responded that he was around on the other end of the job.

In those days no road led directly to anywhere. He knew it would take me 10 or 15 minutes to wind around to the other end. He and I played that game often, almost like adults playing hide and seek.

He had spent the night in Smithwick and was driving in that morning and was running late. I drove to the other end and waited. No Kenny.

A little while later I received another radio transmission asking for me to drive out FM 2222 toward the dam. I did as he ask. When I got to Tumbleweed Hill I could see the blue Chevrolet Pickup sitting on the side of the highway.

Tumbleweed Hill is the very steep incline about midway between Loop 360 and RR 620. It is so named because of a restaurant that used to set at the very top of the hill looking back over the western part of the City. Or perhaps the restaurant was so named, because that was the name of the hill. 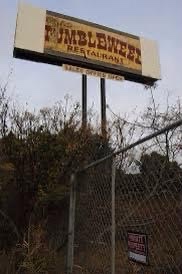 There was a debris field of scattered metal, gears, chains, springs, and oil almost the entire length of the hill.

When Kenny, in his haste to get to the west end of the project ahead of me, dropped off of that hill at an extremely high rate of speed (as fast as that truck would run), we suspect that something in the 4 wheel drive transfer case locked up. This set off a chain reaction of events. The transfer case exploded, throwing the front driveshaft forward causing the automatic transmission to unravel, which in turn broke a large chunk of metal out of the engine block. The front axle was bent as well.

Luckily the rear driveshaft came loose without causing damage to the rear axle and rear end. In summary, out of the whole drivetrain the only thing salvageable was the rear end and rear differential. For a one year old truck, it was almost a total wreck, without a bent piece of metal visible.

That was the first of many severely damaged pickups at the hands of Kenneth Lewis over the next few years. But we won’t delve into all that right now.