The are some things that happen in our lives that leave us wondering about mankind. This story left me feeling less trustful and saddened.

I had become very good friends with an old gentleman that was my neighbor, Udo Haufler. Upon his retiring after a long and successful career as an excavation contractor in Austin, I bought his office and yard along with several pieces of his equipment. I didn’t buy his business per se, and I’ve alway questioned why I didn’t. He had almost cornered the market on doing big excavation projects around Austin. The Haufler name in the excavation business was a good one. Perhaps he didn’t offer to sell the business for fear of tarnishing his reputation. He thought of things like that. Oh well, I guess things work out.

Only one of his ex-employees came to work for me. Woody had been his accountant for several years and I really needed an accountant. All of his other employees scattered to other construction companies around the city.

About three years later, one of his old superintendents came to me and said he had decided to go in business for himself. Eddie was a really well respected and knowledgable dirt hand. Udo always considered Eddie to be a top notch guy.

He said working for the other man just wasn’t getting him where he needed to go. He wanted to build a company for himself.

He had always worked for the other man but knowing he was honest and hard working there was no reason he wouldn’t be successful. Or so I thought.

I had a 12F Caterpillar Motorgrader that I had bought from Udo. It set in the yard most of the time and Eddie knew that, so he ask if I’d be willing to sell it to him. He had been around the machine since it was new and knew what great condition it was in. We were able to strike a deal that was fair to us both. I also had a good water truck that I sold him. I had connections with an equipment finance company so I was able to help him acquire the needed financing to buy both pieces.

This machine looks identical to the one in this story 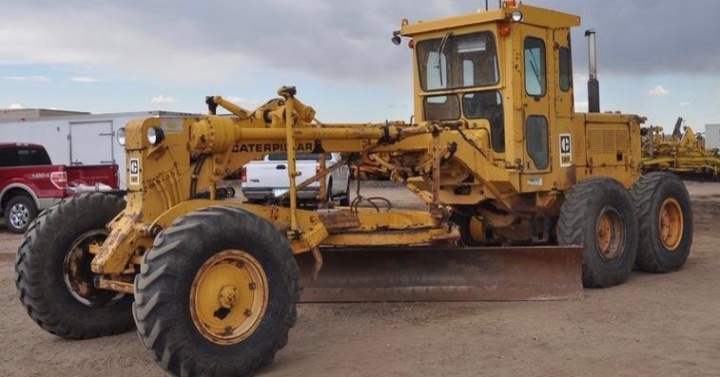 After about six months Eddie came to me and said that being in business just wasn’t for him. There were too many worries and he just wasn’t cut out for it. He just wanted to find a job where he could go home every night and not have to worry about running a business. Would I be willing to buy back the motorgrader and water truck?

I understood what he meant. Most people have no idea what being in business carries along with it. It’s not for everyone.

I really didn’t need the grader but told him I would give him the full amount he had paid me for the water truck. I wrote him a check for the truck. If he couldn’t find a buyer for the blade, come back and talk to me. Before long he was back, asking if I could I help him?

I said that since I didn’t want to have put it back on my depreciation schedule, if he wanted me to make the payments I would do that for the remaining two and a half years that were left on the note. There was approximately $30,000 owed and at a thousand dollars a month, it seemed like something that would help him and I’d be able to do it without being a huge burden on me. Those machines held their value so everything should work out.

The day he brought the machine back, he told me how much he appreciated me taking the payments over and giving him the money back for the water truck. There were tears that welled up in his eyes.

Every month I’d mail him a check for the amount of the payment. I made it a priority to always have the money to him, so his wife could make the payment and protect he credit. We never missed a time of getting it to him.

At the end of the term I called and ask him to send me a bill of sale. He said he would but it never came. I forgot about it and a year or so passed. The machine seldom left the yard. I’d send it up the Smithwick occasionally so my dad could grade his roads.

One day I pulled up on a job site where Eddie was working and ask about the bill of sale. He said that his wife and son thought he should get something out of the deal. “I had to lay awake a nights worried about whether you were going to pay for it or not” was his response. Of course I explained that I had in fact done him a favor in making the payments for him and really had found little use for the machine. He wanted $5,000 to sign it over. No way would I be extorted. He held firm, as did I.

I got busy with life and decided just forget the whole deal. I would use the machine some and never even worried about ever selling it. Therefore the bill of sale was a mute point. I kept it on my insurance policy.

I took it to a project in 1988 to do some cleanup and final grading work. We got back to job after a weekend and the machine was gone. It had been stolen. We turned it in and collected $35,000 from the insurance company. Not knowing what to do with the money, the check laid there for a few weeks.

One day as one of my guys was headed home, he passed a construction site. There was the stolen grader. It had been equipped with a distinctive modification that was easy to identify. Several of us gathered there to wait while the police arrived.

The contractor was none other than Eddie’s son, an ex-city policeman that had recently gone into the excavation business. He explained to the officer that that came out, that I had illegally been in possession of his dad’s motorgrader. They had called in a repossession notice to police department and simply driven it off the job that day, a couple of months before.

We were each told to bring all of our paperwork to the police department the next day to try to resolve the dispute. We each showed up and it was easy to see what had happened. I had every canceled check with the final one saying paid in full.

The conclusion was we could take procession of the machine. Only thing standing in the way was a $60,000 bank loan that the son had taken out on the $35,000 machine. If we would pay off the loan we could have the machine.

We walked away knowing we had literally had a machine stolen from us. The bank ended up having to take the equipment back when that business failed, not many months later.

We returned the insurance check.

A while later I saw where Eddie had passed away. He and I had never spoken again.

A year or so later I took my kids to a movie one evening. As we were leaving I looked up to see Eddie’s son, who was Eddie Jr., walk in with his family.

I stood back and when they got in the concession line, I walked up to him and re- introduced myself and said “I saw where you lost your dad a while back”. As he shook his head I then said “where is he buried?” Surprised by my asking he told me. I then added “good, I be there tomorrow to piss on his grave”, and then turned and walked out.

I didn’t go. I should have. Maybe I’ll outlive Eddie Jr. He is really the one that deserves the honor of me visiting his grave.

Gosh, do I sound bitter?