The 1960s were most definitely a different time than now when it comes to the horsepower of trucks. Today our trucks operate with 400 to 600 horsepower. Back then the common range was 180 to 250 HP. We still hauled equally heavy loads over the same roads as today. Trucks were used much longer and maintained must less than by today’s standards.

It was common when we were hauling a heavy dozer in hillier areas for me to go ahead in a pickup to assist. When we knew there was a grade too steep coming up, Kenny would pull over, I would come around to the front, a chain would be hooked to the truck and away we would go. The pickup would help keep the momentum up and it worked surprisingly well. Something Cecil Lewis taught us.

One day down close to Turkey Bend where we were building roads, there was a long steep grade to navigate. Kenny and I were together and were taking a brand new JD 450 track loader that Cec had just purchased to the jobsite . It wasn’t that heavy so we didn’t have an assist vehicle along, but we had almost crested out on top of the hill, the truck stalled.

As was normal the truck wouldn’t start without a jump or a push, so it left us stranded, with it being a couple of miles to where we had other trucks and equipment. We devised a plan of action. Kenny would roll backward down the hill, jack knifing the trailer into a high dirt embankment, then I’d simply get on the loader and walk it off the back. From there it would be the simple task of using the loader to push start the truck, then drop the trailer and reload the JD 450 and be on our way.

As with most well laid plans in those days, everything needed to work right for it to work at all. Kenny miscued as he jack-knifed the trailer, leaving it backed up to level ground instead of the high dirt embankment.

Standing there contemplating our next move, I decided if I got on the loader, of which by that time I was a master at operating track loaders so spun it around, facing the other direction. I had been running track loaders for three years by then. I was too young and too small to drive a truck so the loader duties were always mine.

With the loader bucket facing the back of the trailer I simply drove it off the back, with the intention of stopping once the loader bucket hit the ground, which was 5 feet below. As with many things, I hadn’t taken into account that the slight leaning of the trailer and the loss off friction between the tracks and steel tail roller bar on the oilfield float. The next thing I knew then loader was off the trailer, on it’s side and my head was planted up against huge boulder. A fine mess we had then.We remembered seeing that Jim McCorkindale was working cattle a 1/2 mile down the road at his corrals. Me bloodied, with a huge gash on my forehead we strolled up to the cattle pens. Jim just handed us the keys to his pickup. I’m sure he thought that Kenny would rush me to the hospital. Instead we headed out to retrieve a dump truck at the work site, which we used to pull start the truck. We then winched the loader back upright, loaded it and returned Jim’s pickup. All this accomplished in a remarkably short timeframe.

The only damage to the loader was a slightly dented battery box, but it was completely operable.

With all that done we went ahead with our days work.

Cecil and Bonnie Gay had just left the afternoon before on a vacation to California. A couple weeks later when they returned, Cec said “Ron, what the hell did you do to that battery box”? I don’t remember if told him the truth or not. I probably didn’t. I wouldn’t have wanted him to worry about leaving us alone.

Below is a JD 450, the rolling tail bar on an oilfield float trailer and the scar on my head 50 years later. 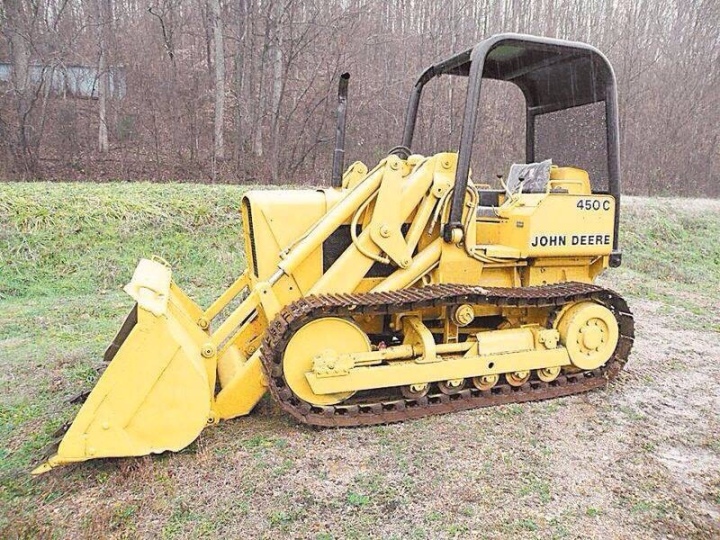 Below is the rock bank that we were wanted to back up to, but…….didn’t.