Back in our earlier years of marriage I thought buying Madeline nice gifts was better than winning her over with my charm and kind words. So I bought her nice jewelry. I always went to the same fellow, Mr. Runnels at Benold’s Jewelers to make purchases.

Sometime along the way, probably around 1980, I bought her a watch. It was a BAUME et MERCIER and a really nice watch. She wore it quite a bit. One day, in the mid 80s, she told me it was missing. She was all torn up about it.

We had a housekeeper, Lilly, that had worked for us for several years. We never ever thought she took it, but when she found out we were on the hunt for it, we always felt like she thought we suspected her of taking it. We did everything to reassure her, but was never sure that she felt much comfort about it.

We were country folks then. We had burn barrels where we disposed of our trash. I dumped out the several barrels that we burned in and meticulously went through the ashes. Not wanting to think the watch had burned, but if I found it, at least we’d know. Nothing showed up.

I bought her a replacement, same brand. The new one was prettier, I thought. But she missed her original one.

After a year or so, I got in the mood to clean. We had a Jenn-Aire downdraft exhaust grill. We seldom used it, as it was too hard to clean and we cooked steaks on an outside grill. But knowing it needed cleaning, I tore into it. In the very bottom of the exhaust filter, under the accumulation grease, was the watch. The ruined watch. At least we could tell the Lilly the housekeeper that it had been found.

I took it to Benold’s, just on the off chance it could be reconditioned. They sent it back to Switzerland to the factory. A few months and a few hundred dollars later the watch came back and was just as beautiful as it was the day I first bought it.

The lesson I learned from this was to clean the Jenn Air Grill more often. 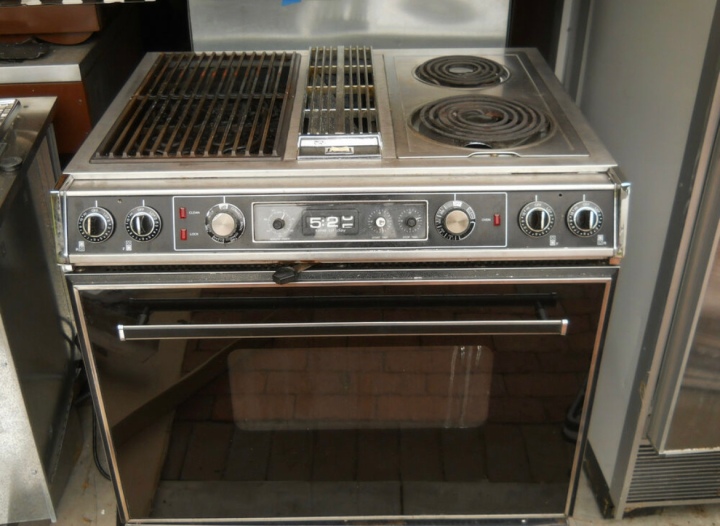 This is a similar type of stove/cooktop with the center being the downdraft vent.