(this story happened in the early 2000s)

Kenny has always had a lot of company pride. He likes all of his machines and trucks looking good and clean. Everything needs to be ship-shape in Kenny Lewis’s world.

He enjoys having his company name on jackets and caps. He spends a lot of advertising bucks and it pays off for him.

I see people wearing them often, putting the CCI out in the public.

Kenny and I had an arraignment for about a decade that lasted until 2003. We pooled resources and CCI was the name that was in the forefront of the business. Advertising was good so all of his people and all of my people all wore CCI labeled caps and jackets. When times changed and we decided both of our situations would be better to part ways, we carefully planned how to re-brand the companies and make a smooth transition.

There were a few boxes of caps leftover that were sitting in my office. One day a couple of my guys got a box each of the caps started handing them out to the homeless people around Austin. If you have ever been around Austin you know that panhandling is only second in number of people to state workers.

Within days everywhere you went in Austin a guy or gal was sporting a red CCI cap. Seemed like pretty good exposure to me. Not that I had anything to do with them handing out the caps, please understand.

When Kenny drove through the city and saw my all those caps, my phone started ringing. “You think you’re pretty damn funny don’t you Ronnie Gene Lewis”.

Of course not knowing anything about what he was referring about, I said “Ken, what’s going on”?

He was truly ticked off, only like Kenny Lewis can be ticked off. He didn’t like that kind of exposure. That wasn’t helpful for business. My denials fell on deaf ears. He was convinced I was behind it. But please understand I had nothing to do with it. I told him so.

I think he hung up on me a time or two. “Calm down Kenny, can’t you just go around town with a pocket full of tens, and buy them back? “ was my suggestion. That wasn’t what he wanted to hear.

I finally figured shutting up would serve me best for awhile. He called me a day or two later explaining what his plan for retaliation was. He was going to order a few boxes of black Lewis Contractors caps and go around and swap them for his red caps. “fine with me, I would like people in Austin to know I’m willing to help the homeless population” was my response. I even sent the LC logo over so he would have a leg up on getting the caps made.

I guess he thought better of his later idea, because in never saw any of my caps on Austin street corners.

The red ones started disappearing and soon there wasn’t one in site. Rumor was a few of them were forcible taken from bums around town but I have no proof of it.

This is a continuation is the red cap story above

The Red Jackets (this was written a few years ago)

I stopped by my brothers office yesterday. He and his trouble making son Kody were sitting in his office. Of course Kody just had to bring up something about the caps getting handed out that time on the street corners.

I don’t like to mention things around Kenny that get him stirred up, you understand.

He told a story of being at a Liberty Hill football game a few years back and looked over and a old boy had on a Red Carhart CCI jacket on. He didn’t recognize the guy. But he had given out so many, perhaps it was a building superintendent that he didn’t actually know. That happened some times. He kind of kept sidling around till he could see what the guys name was.

It had KENNY on it.

He approached and said “where the hell did you get that jacket from?”

The guy told him that he runs a cafe there in town and some ole boy left it hanging on the back of a chair.

Kenny said “well since it has my name on it and the phone number is right there in big letters you could have called me.”

The old boy had a dumb look on his face. And then Kenny said, “I‘m going to need my jacket back”.

The guy told him that it’s too damn cold to do without a jacket so he’d give to him after the game.

Kenny agreed but when the game was over the guy cut out for his pickup. Kenny had to run him down to get his coat back.

Here is one of mine from the CCI years we spent together. 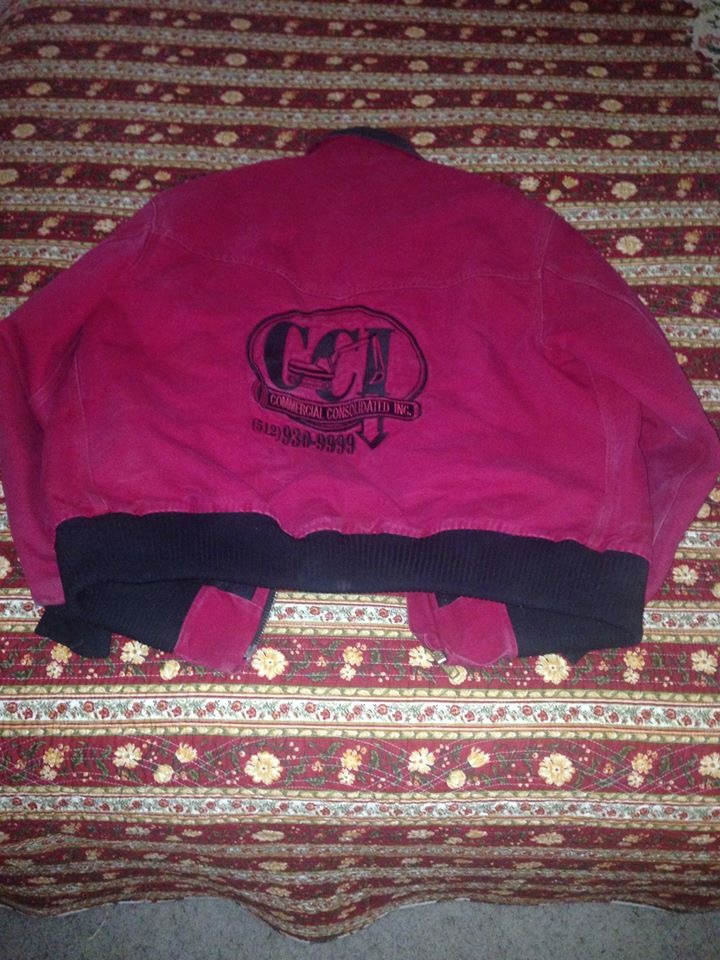 (Look at that phone number right in plain sight.)