It was brought to my attention some time back that in the Smithwick Cemetery there are the graves of 6 children that died during a very short period of time.

They all died within 4 years. I found several oddities about this. If they had all died at the same time, perhaps the plague or a house fire may have been the cause. But they died in groups of 2.

I guess this says something about how difficult times were in those days. All six deaths happened in the coldest months of the year.

There appears to have been 2 other children that survived until adulthood and each had large families.

The graves of these children, including their mother, Mary were originally buried in the Georgetown, Texas area and were relocated to Smithwick when Lake Georgetown was built in the late 1970’s.

The father, Daniel Brown Boultinghouse it is believed died during the Civil War while he was in Galveston, in 1864. The mother died in 1866.

It just seems like unbelievable circumstances befell that family during a 7 year period.

I shared this story on a couple of other groups to see if anyone knows what all really happened to this very unfortunate family. 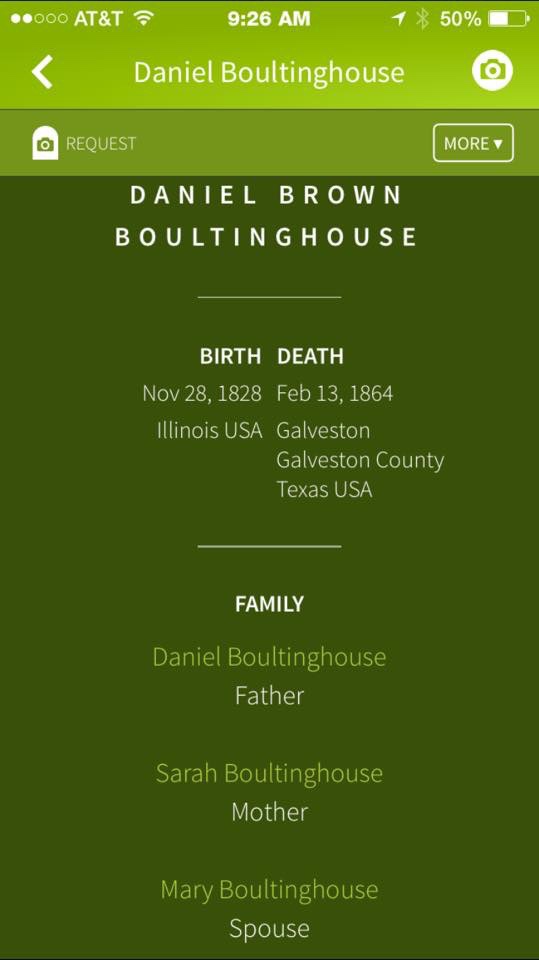 THIS IS PROBABLY THE BEST INFORMATION WE ARE GOING TO GET ON THIS SUBJECT: Terry Mankins Sowers, the Great Granddaughter of the surviving girl, Sarah Elizebeth Boultinghouse Russell put the following explanation on one of the other groups.

The accepted theory is that the children died of diptheria. I too have wondered why all died in the winter. My assumption is perhaps the flu, and then pneumonia. The information from here I gleaned from all of those Civil War Letters that Daniel and Mary Jane wrote and managed to be saved. I do know that Daniel Brown was not a very healthy man himself, suffering from some type of Chronic respiratory disease. In fact, before he was conscripted into Confederate service, a doctor verified he was not fit to perform duties, but he had to go anyway. He also had a petition filed for his release from duty from many neighbors saying the women remaining in the home area needed a blacksmith and man to help them survive the war with their menfolk at war. It was approved, but alas too late, for he died at age 35 a few days after the approval. Their were two surviving children of this union. Daniel Josephus was born on Dec 4, 1862, and on Dec 16 the two boys died. Imagine having a 12 day old baby and losing tow sons in one day. My great grandmother was Sarah Elizabeth. She was 11 when Daniel died,and 13 when her mother died. She and her 2 year old brother were orphans, losing both their parents in a 2 year span. Both Daniel and Mary Jane died in Feb, at age 37- winter months again. Family lore said Mary Jane died of a broken heart, she probably died out of exhaustion and sorrow. Mary Jane’s father took in the 2 children, he was a Babptist preacher. I often wondered if Daniel Brown had a genetic respiratory problem he passed onto his children who died early. The two surviving children lived to be adults and I really don’t know much about Daniel Joesphus. To me it was amazing to read the weekly letters from Daniel Brown and Mary Jane wrote to each other. Since Daniel Brown died in the Confedrate camp, his personal effects were returned to Mary Jane, that is why we have the letters that answer each others questions weekly. Those letters to each other gave us insight to their personalities and great faith in God. Buried with the family was their Black slave woman, “Columbia”, who they thought of as family. The letters mention her and slave” Mr Hogue” as why Mary Jane could survive the times of the Civil War. The letters give great information of conditions at home from a woman’s perspective and battles from Daniels perspective of events. It is astounding that the letters survived at all, much less considering the ages of the 2 surviving children, I suspect John Houston Russell the grandfather kept them for the children to “know” their parents through their writings to one another. These letters are what stimulated my interest in my ancestors and helped me gain a much time consuming hobby.