I had always loved these motorhomes. My neighbor, Udo Haufler had one for a few years. They were only produced for 5 years in the 70’s. The oil embargo hit and people’s buying habits changed for several years and General Motors decided they needed to concentrate on things other than a cool looking motorhome. They were made from a lot of aluminum and fiberglass so weight wise they were great. They had been designed around the Oldsmobile Tornado engine and front wheel drive setup. They never had the power needed in my opinion.

I knew all of this but bought one in the middle 80’s anyway. My thought was with seven of us traveling a lot we could install a big TV in the back and set the boys down and plug a movie in and when someone needed to go to the restroom, there it was.

I immediately started dumping money into it, making it the perfect traveling vehicle. I don’t think I was listen to Madeline’s objections. Her saying “I’m not driving it, ever”.

Once it was all outfitted with new upholstery and a built in swiveling rack for the TV / VCR Combo, it was ready to travel.

I was working in Dallas at the time. I called home one Friday to tell Madeline that I had Dallas Cowboys tickets for us on Sunday. My good friend Jim, who was also my administrative assistant was in Dallas too.

I said “How about when school gets out, pile the kids in the Motorhome and head for Dallas. By the way, bring Jim’s 4 kids too“. He was recently divorced and had the kids for the weekend. Jim had 3 boys and a girl. They were the same age as our kids.

All twelve of us would be doing all kinds of fun things Saturday and then the Game on Sunday.

She and nine kids hit the road from Dripping Springs in the Motor Coach and by the time she finally arrived in Dallas, after fighting I-35 traffic for hours, she wasn’t the ever pleasant Madeline.

When she got there is when it really dawned on me that she had been serious about not wanting to drive that rig down the highway, ever.

Now it’s not that she wasn’t capable, because she is a great driver of almost anything that moves down the road. But her motherly instincts had told her that we weren’t simply going to get all the kids in the back sitting in a line watching movies without there being some discontent from time to time. Jim’s kids mixed into the situation certainly didn’t have a calming effect on it either.

I don’t think we ever made another trip in that rig. In fact if memory serves me correctly, she drove home Sunday night in my Suburban alone after the game while Jim, the 9 kids and I came along in the the Motorhome. I think the original plan was for Jim and I to stay there to work the next week, but after that fiasco, we were more than happy to get the kids back home, then turn right around and drive back to Dallas the next day.

That lesson taught me to become a much better listener. I think. Didn’t I do better after that Madeline ?

It was almost a dead ringer for this one. It was a slightly lighter color of yellow. 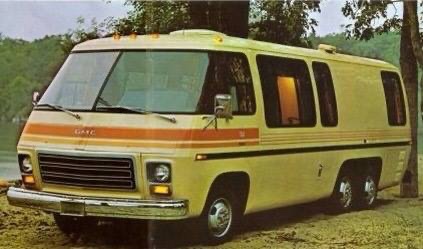