It’s always fun listening to kids, starting back when I was one, dreaming about where their life would take them. “What I want to be when I grow up”, kind of stuff.

Life is made of dreams. I was no different. Well maybe a little different. As I got on up in my teen years I just thought more about doing whatever it took to survive. I had extensive skills and experience working on cars, trucks and heavy equipment. Even at a fairly young age I was a good truck driver and an accomplished equipment operator. It was the way we were brought up. So to say I had a big dream for life, not really. But I always knew there was something out there for me.

However there was a time in the early 60’s that I felt like I was on career path. At Paleface Park, there was a Horse Racing Track. It paralleled Hwy 71 along the north side of the road and just east of the FM Road that goes down Briarcliff. The races became Sunday afternoon entertainment for the area. If I remember correctly, the Shetland races started off the day, moving on to Quarter Horses afterwards.

Kenny and I were into breaking, training and riding Shetland’s so we were naturals for the sport. Since I was so small and didn’t appear to be growing, I saw that as something that I could use to my advantage. I would make the perfect Jockey. A pretty good profession and they made a lot of money.

Our Dad, Cecil, started hauling us over there to race. Kenny and I could easily win our races unless one thing happened. If Johnny Cox was there and competing then we would only take second place. As we got older and after our days of racing were over, the sting of defeat left us. It wasn’t so bad that Johnny Cox had dominated us, because he went on to spend his life in around horse racing. 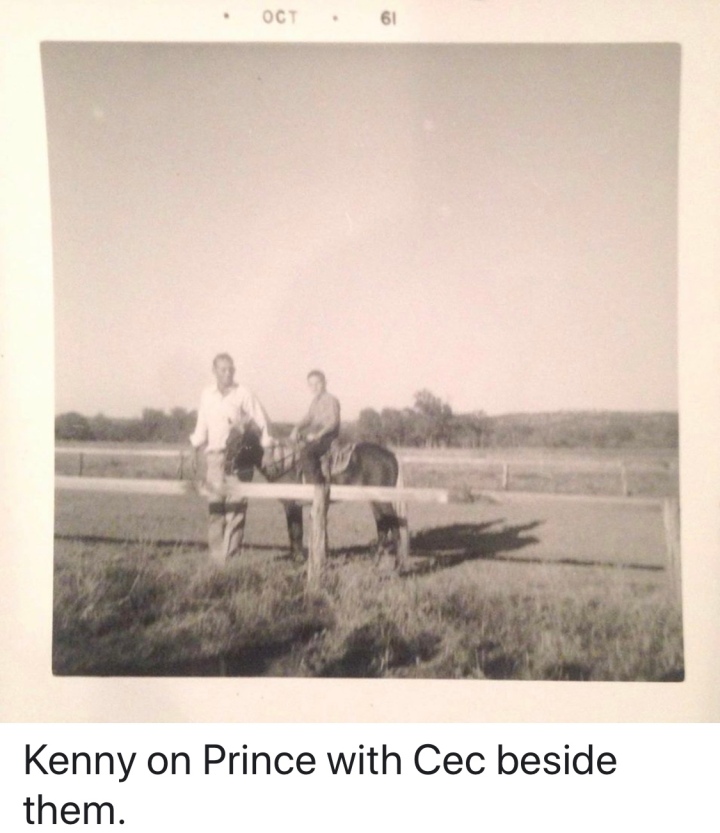 The two horses we mainly rode were a sorrel Shetland names Sunburst. The other was a little gray pony named Prince.

Peanut, The Fastest “Little” Horse Around

A while back I messaged Racing Legend Johnny Cox and asked if he had any pictures of that old track. He sent me one back that shows a little horse just crossing the finish line. The picture is blurry, it looks like it was taken through the window glass of a car. I sent the image to Kenny. Immediately he texted back to say he bet that was the famed Shetland, Peanut. He went on to say that Johnny rode Peanut for an old fellow from Austin he thought. He talked about how he didn’t remember anyone ever out running Peanut with Johnny riding him. 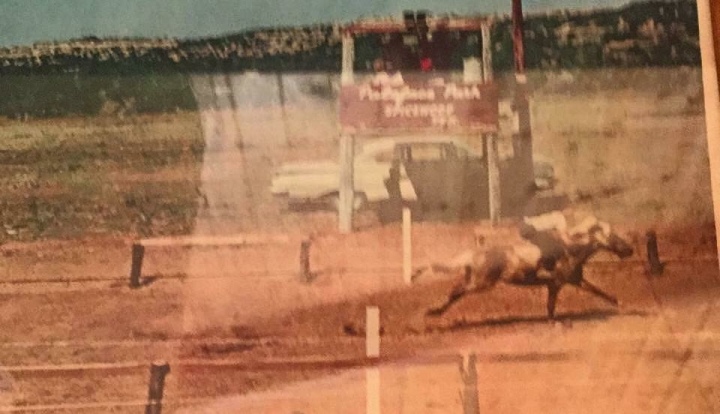 Sure enough I went back and forth with Johnny a couple of times discussing what Kenny had said. (Wouldn’t it be easier if Kenny was on FB? – oh never mind we already decided that wouldn’t end up good, as it would probably end up with me and him fighting like we did as kids) Anyway all that seemed to be true, except the old man that owned Peanut was Mr. Ross that lived just 3 miles down the road from the track.

As I side note, my Sister in Law of 45 years, Sue Jordan told me just a few weeks ago that her dad, Buddy Browning was a big fan of Paleface Racing and how they used to come there too on those Sunday afternoons.

I wonder what else about that old track has gone unnoticed for well over 50 years? Who else was always there? Is it possible that money exchanged hands?

Johnny and Peanut Johnny said he won 17 races on that little horse. My bet is that it was a 17-0 record.