I was a late bloomer in many ways. I always longed to ride anything on 2 wheels. But living out in the country in what was the biggest rock pile imaginable, out on the creek a few miles from Jollyville, left it almost impossible for me to learn to ride a bicycle.

One day while visiting friends in Austin I tried out my first ride on a bicycle. I was probably 8 or 9 years old. I got the hang of it that day. I somehow came up with an old style, very rugged bicycle to ride back out in the country in all the rocks.

I kept busy fixing flats and trying to ride it. I always dreamed of a new bike but knowing there was no way I’d ever be able to utilize it like most kids would, it just never happened. By the time we made it back to Smithwick to live, I became a teenager and the days of riding bicycles was no longer in the cards.

I did make a trade for an old Cushman Scooter that looked very much like the one below. 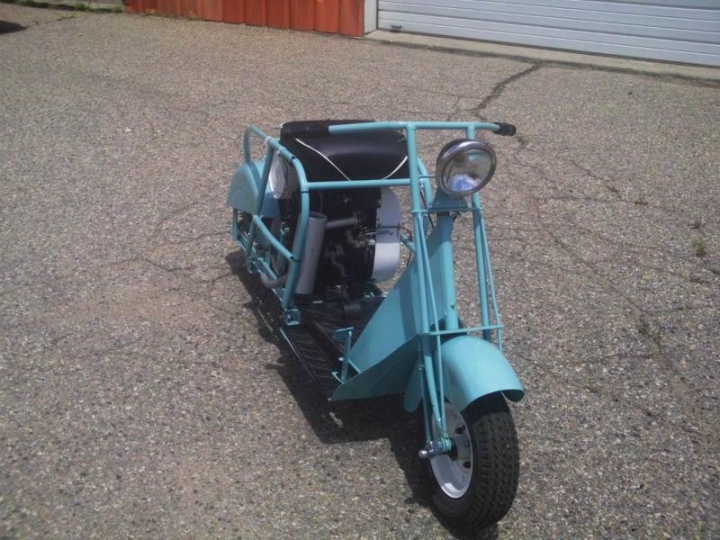 Smithwick wasn’t the best place to ride it, but I still ripped around the place, back and forth to the lake. I didn’t try it out on the highway. It just didn’t seem like the thing to do.

When I was in the 8th grade and Tommy Houy got his new Honda, a 350 I think, I was sure that was what I needed also. I made the pitch to my dad and it went no where. He wouldn’t even discuss it. He usually didn’t react to things the way he did with my quest for a motorcycle. That didn’t deter me, so as soon as I got my drivers license at 14 years old, Tommy and I went to Burnet to get our motorcycle endorsement on our licenses. I rode Tommy’s new bike. I believe that’s the only time he ever let me ride it.

I was sure that if I had my motorcycle license, I would eventually wear Cecil Lewis down. He finally told me that when he was younger he had a motorcycle. It was right after he came back from the war. He had a couple of incidences where he narrowly escaped serious injury. The last one was right at the edge of town as he was coming from Smithwick to Marble Falls. He pushed that old Indian Motorcycle over into the brush and caught a ride on into town. He sold it and never got on another one. He said “you will never ride one as long as I live under my roof. If you want to kill yourself, do it after you get out on your own”.

Something caused that to sink in with me and I moved on, never having a motorcycle. After I was grown it just didn’t interest me. I had the responsibility of a family and a business to run so I never thought about it.

A good many years later I was hanging around the BMW/ Moto Guzzi dealership in South Austin that my very good friend and neighbor, Udo Haufler owned. I would go there often to visit with Udo. It was one of several enterprises that he was involved in. He had spent his whole life riding motorcycles of every kind. I saw a BMW Motorcycle that looked like it would fit me just right. I was in my early 30’s and usually did whatever I wanted. It was time for me to have a motorcycle.

I couldn’t have been more wrong. When Udo found out I was about to buy a motorcycle, he immediately put a halt to that sale. I had thought he would really like the idea of me having a motorcycle where we could ride together. He flatly refused to let me get it. It wasn’t that he didn’t like making a sell, he just didn’t want me being the buyer. He said “Boy, that’s the last thing you need to buy”. (He always called me Boy) He told me he didn’t want to be living across the street from a widow with five young sons. He was more adamant about me not riding than my own father had been. The desire of owning one never left me, but I put the idea on the back burner once again.

In the spring of 2006, Madeline was on a trip to someplace and our last son was graduating from college in May of that year. On a Friday afternoon I pulled into the Honda Dealership in North Austin and bought a new GL 1800 Good Wing Honda, with everything I could get on it. It was going to be ready for me to pickup the next day. I got one of my sons to drop me off that Saturday morning. 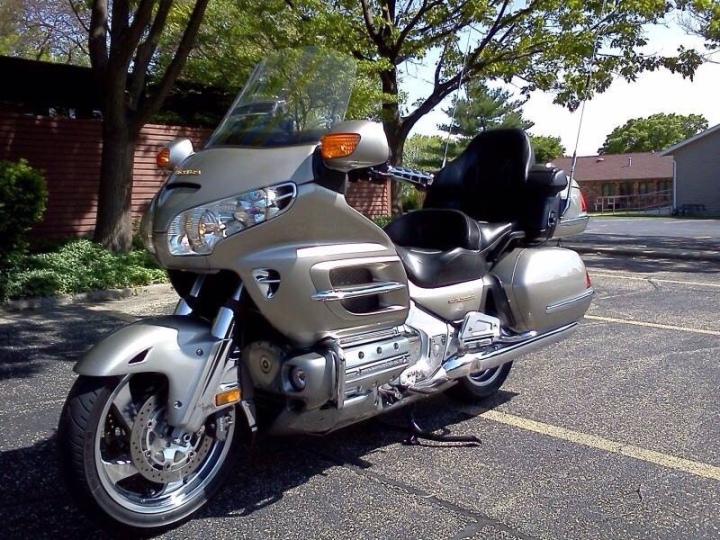 I straddled that almost 1000 pounds of high powered chrome and paint for the first time. I’ll admit my legs felt a little shakey, but I pulled out of the dealership and hit I-35 northbound, blending in with heavy Saturday morning traffic. The nervousness soon left me. I rode it a lot that year.

Madeline didn’t embrace it so much. I think she got on behind me one time for a short ride around the countryside. I was sure with time she would enjoy it with me. She never did.

I rode it a lot for the next 2 or 3 years. With each year afterwards I rode less and less. Sometime along the way I started taking statin drugs Statin for cholesterol problems. That left my legs weaker than I felt comfortable with. Balancing that heavy bike just didn’t feel right anymore. That caused me to ride less and less.

Yesterday I realized that I hadn’t ridden it in 3 years. It sets in the garage, taking up space. I just start it up, listen to it purr and then turn it off. The cat, Oliver started using the back seat as his bed. After seeing how much he felt at home there, I bought him a bed and placed it there for him.

With just over 24,000 miles on it, it will make someone’s dream come true. That baby has a lot of life left in it. And hopefully, so do I.