After the prosperous years of the 80’s came the real estate bust of the late 80’s and early 90’s. Kenny, Coy (of double tailed quarter fame) and I were teamed up again doing work together.

The days of mobile phones had given way to pagers and pay phones.

Mobile phones were very costly in the early days. My average phone bill in the 80’s was $1,000 – $1,200 per month. And that wasn’t for the whole company, that was just me. I stayed on the phone constantly, conducting business and doing a fair share of BSing.

Those costs just weren’t in the cards in lean times.

It became a major annoyance to constantly be getting paged and then finding a pay phone. At least one that would work.

I always would see the phone company guys pull up to a box along the street and clip their phone on to the wires and talk away.

So I was off to a store to buy some nice little princess phones that I could alter and equip with some little alligator clips so we could replicate what telephone company employees did.

For a few bucks, I had Kenny, Coy and myself up and ready to go. Where ever we were working we could find a little strip center somewhere so we could simply drive up and flip open a box, clip on and start calling. Life got much more easy.

If the store owner came on the line to make a call, we would say we were working on the line, please give us a minute and everything should be fine.

Then I remembered that all wastewater pump stations had telemetry that allow the pumps to auto dial the headquarters if there was a malfunction. Actually those lines seldom if ever were used. They were generally stuck away way out in an out of the way place. So we could just about set up an office there in the front seat of a pickup.

I even equipped mine with a fax machine. With the cost saving it didn’t take long before we were making enough money to afford the newly developed cell phones which were much cheaper to use.

Heck it wasn’t long before I had one from all three of the carriers, so I’d be able to call from just about anywhere. The only downside was when a phone rang, you didn’t know which one of the three to grab up.

Kenny’s son Kody was asking about this chapter in our lives, Kenny reached in his desk drawer and pulled this one out. I guess he kept it around. You never know what tomorrow will bring! 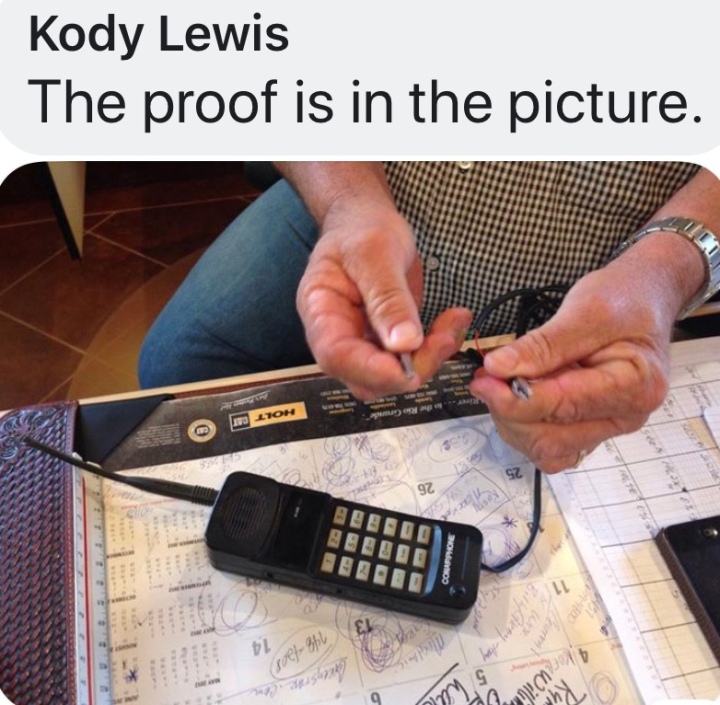