With it being the time of year when the temperatures are cooling down, let me tell you about a Blizzard we once experienced.

His name was Vernon (Blizzard) Blisard. He worked with my grandmother Ruby at the State School. That in the early 1960’s over in west Austin.

I don’t know what Vernon did at work but away from work he traded in Shetland ponies. He didn’t just deal in them, he was a Major Shetland Pony Trafficker. If you, like many parents of that time, wanted your child to have a Shetland pony you went to Vernon Blizzard to get your fix.

I remember Vernon being married. I even recall what Mrs. Blizzard looked like, but she didn’t really enter into the picture. Heck, maybe he traded her for some Shetlands sometime along the way.

The problem with Shetlands was their temperament. When you had a mean one, it could be a real chore to teach them manners. With a big horse when it came to breaking them to be ridden, there were cowboys around to do that. But with Shetlands, a big ole cowboy couldn’t ride them. So here is where Kenny and Ronnie came into play.

When we were first introduced to Vernon and started working for him, we were about eight and ten years old. He would bring us several horses at a time and it was our job to make them kid friendly. I’m going to tell you up front that Kenny Lewis was the horseman of the family. He had a passion for horses. I was more of a donkey kind of kid, but you weren’t going to make a living breaking donkeys. So while I didn’t care about riding that much, I was thrust into it as a job and a way to earn money.

I recall that Vernon would keep about a dozen Shetlands at our place that needed work. Our place was just a little ways out of Jollyville. It was 65 acres of the hilliest and rockiest ground anywhere around Austin.

Learning how to stay on a Shetland was made easier by the fact that if you got bucked off more than likely you’d land in a rock pile. In many rock piles were copperheads and rattlesnakes. It paid to stay on.

I think the way things generally worked was we put a saddle on it and Kenny would lead it around until it was used to it. At that point I’d get on and he would still lead it around in the pen for awhile. Then when he felt the time was right we would head on out to the pasture.

Today there are the horse whisperers. That seems a popular way to train and deal with horse attitudes. Kenny was like that back in the day, before that term was even coined. Except he was the Shetland hollerer. That boy could make more noise and get madder than any human alive. Sometimes at the animal and sometimes at me. I didn’t always follow his orders all that well.

Kenny was a good horse trainer and has remained so throughout his life. As for me I never graduated past Shetlands when it came to riding and breaking horses. Falling off one of those short legged little things hurt enough, I sure wasn’t up for falling off of a full sized horse.

We lost touch with Vernon after the Shetlands days and Jollyville passed us by.

However in the late 1980’s I decided it would be good to find him, if he was still living. I was able to get a phone number on him and then gave Vernon a call. Soon thereafter Kenny and I drove to Elgin to pay Vernon a visit.

It was a great reunion as I remember it. He had spent several years as a Bastrop Co. Constable and had long moved on from the Shetland pony business.

When we got up to leave that afternoon we were standing on his front porch. Kenny looked up and saw a pair of spurs hanging from the ceiling joist. Kenny remarked that he had a pair exactly like them. Vernon reached up pulled them down and handed them to me, saying “well you boys both need a pair then” and handed them to me.

I kept those spurs in a drawer for years, for safe keeping. One day sometime back I got them out and took them to Kenny so he could match them up with his spurs.

We left that day and I don’t think that Kenny or I ever spoke with Vernon again. Shortly after I saw his obituary in the Austin paper. It made me very proud that we made that effort to go see him when we did. 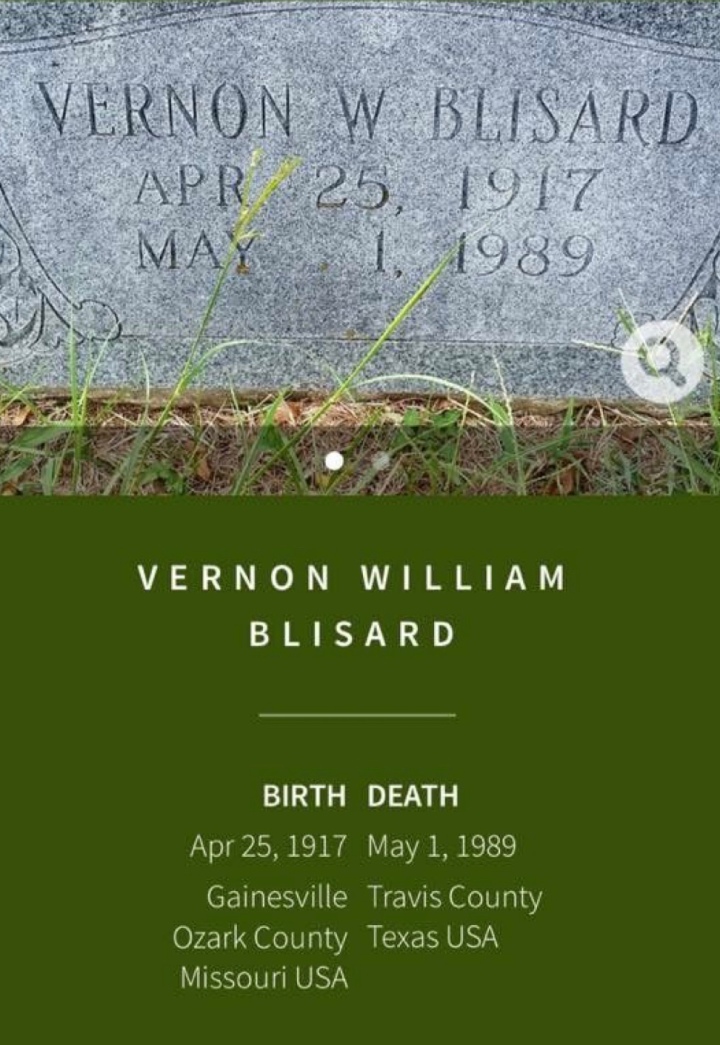 More About The Spurs

A couple of years ago I went out to see my friend Howdy Fowler in west Texas where he was putting on a Bit and Spur Show in Alpine. Remembering the Vernon Blizzard Spurs, I called Kenny and got him to send me a picture of them, so hopefully I could get them identified by some knowledgeable spur people.

I found out that what he had handed me was a pair of Buermann Spurs. The first picture is the actual spurs. The next 2 photos are examples of other Buermann Spurs. It seems that they are very collectible. 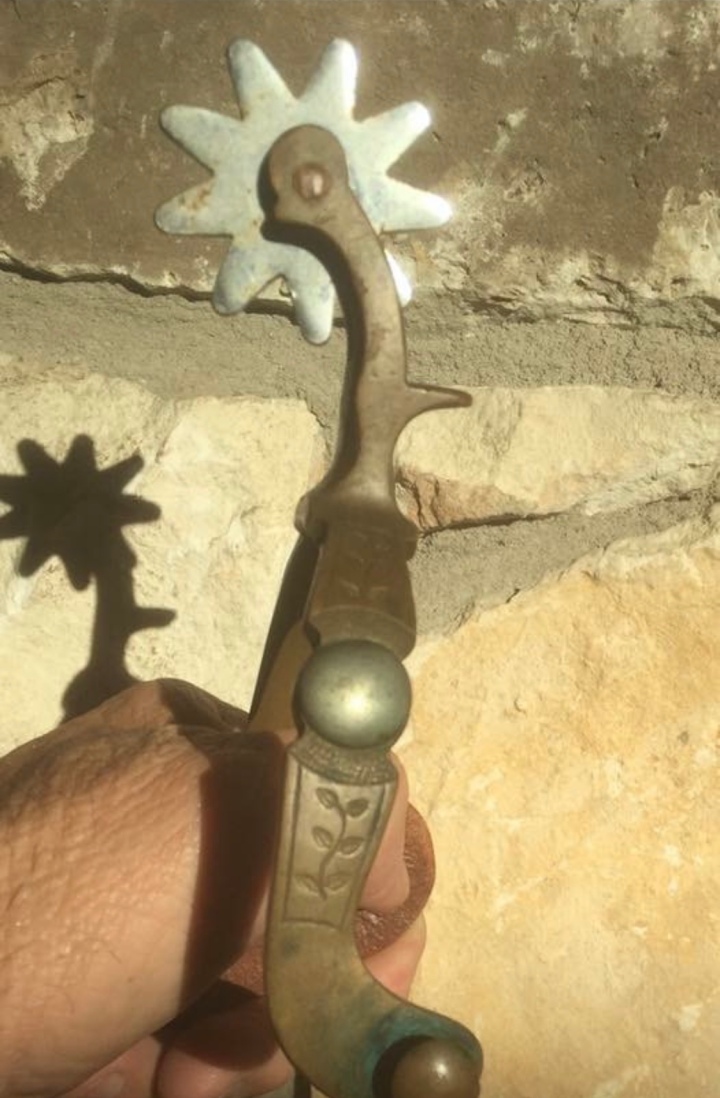 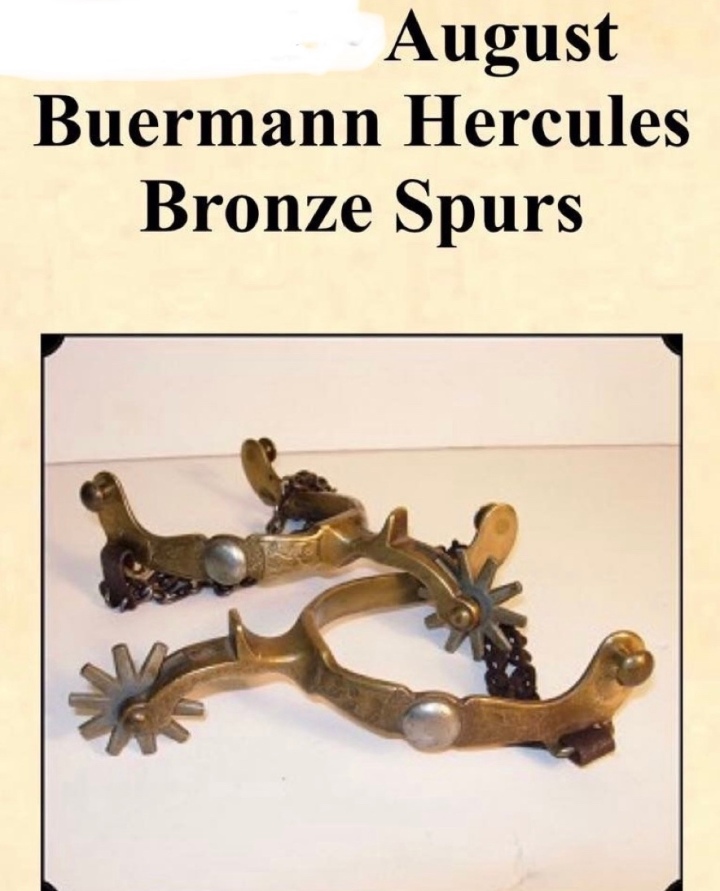