Below is about the best article I’ve found on the history of the SA Union Stockyards that has now been closed for more than 15 years.

From The Houston Chronicle:

SAN ANTONIO — After 112 years as a landmark of the South Texas cattle industry, the Union Stock Yards held its final auction last week, giving workers and well-wishers one last chance to savor its colorful yet faded traditions.

In an auction barn that used to witness thousands of transactions a day, only about 130 head of cattle were sold — mostly at above-market prices to nostalgic buyers.

Together with families that have operated the facility since its inception, the small crowd of cattlemen and women bid farewell to a business that sprang up in 1889 on what used to be the outskirts of the city — where cattle trails met railroads — and soon became surrounded by slaughterhouses and packing plants.

But over the decades, the 34-acre stockyard has been swallowed by urban growth and its large-scale way of doing business has been supplanted by small, rural auctions and direct marketing by ranches, including over the Internet.

“This is an emotional morning,” general manager Mark Judson said glumly, before thanking the many people who kept the business running for so long.

If the stockyard’s woes were boiled down to one word, it would be “location,” said cattle buyer Jeff O’Quinn of Hereford.

“Where the (large) numbers of cattle are, they have to drive past two or three auctions to get to this one,” he said. One reason for that, he said, is urban growth that has reduced the number of large ranches close enough to San Antonio to make doing auction business here feasible.

Some longtime workers were misty eyed as the last few cows went before the auction crowd. But others kept smiling as old friends bade them farewell and mourned the loss of an institution.

“Things happen. I’m very disappointed. I started working here when I was 13 years old,” said Milburn Mertz (Bubba)Kothmann of the J.W. Kothmann & Sons Commission Co., one of the oldest livestock brokerage firms in the nation.

The 77-year-old cattleman has been a fixture around the stockyard since 1948. “Now I’m just going to shut my doors and sit at home and watch the grass grow,” he said.

His grandfather, J.W. Kothmann, went into the cattle business in 1893 and became the stockyard’s first tenant. The first cattle sold by Kothmann’s new company came from H.B. Zachry’s ranch in Webb County and as a tribute to that historic tie, the last cattle auctioned were brought to sale by the Kothmann company for the U-Bar Ranch, which is owned by H.B. Zachry Co.

“The Stock Yards is not an office. It is not a job. It is a family,” said a prepared statement from the Kothmann family.

“The Kothmann business was subject to market prices, economic hard times, wars, weather conditions and natural catastrophes. It is hard for any business to succeed in San Antonio for 100-plus years. It is real hard in the cattle business,” the statement said.

When its weathered, empty pens are dismantled, plans call for turning the site along Interstate 35 into an industrial park, possibly with a tie to NAFTA activity. For more than a decade, warehouses have been springing up around the stockyard, about two miles southwest of downtown, replacing dwindling livestock-related businesses.

“When we started, this place was out in the country. Now it’s right in the center of town and there just aren’t the cattle there used to be,” said Carlton Hagelstein, a retired 50-year employee whose great-grandfather helped launch the stockyard.

In the auction facility’s heyday in 1950, about 1 million head moved through the stockyard. Two decades later, less than half that number were handled and by last year, the traffic had shrunk to 82,000 head, Hagelstein said.

“Give ’em a few months and they won’t even remember we were here,” he mused. “It’s sad, but that’s the way it is.” 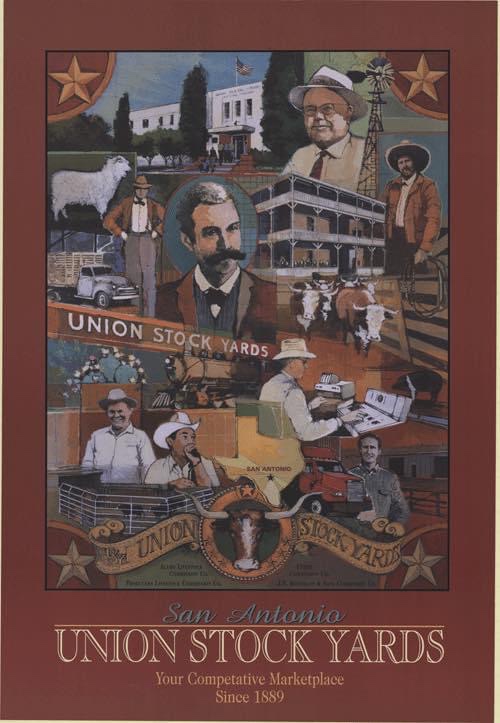 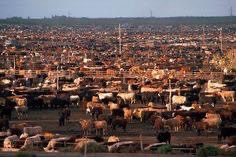