When we first acquired these machines in the later part of 2007, they were bought for a particular project, that was in some fairly hard limestone. We had approximately 6 to 7 miles of very deep wastewater to lay. We didn’t have our own deep trenchers that it would take to dig the depths we were going to need. We would generally subcontract that portion of the work out.

We had equipped our two 385 Cats out with Leading Edge buckets (the very strange buckets at the bottom of the page) and had been having great success excavating rock with them. I didn’t think the 385’s were enough machine to tackle as much rock as we were going to have on this new project. They were almost large enough but I couldn’t get a comfort level with getting the production we would need.

I decided that if we “went big”, that we could dig that job. At that time Caterpillar didn’t have a machine in the weight class we would need. That left two manufacturers that had dealerships that serviced this area in Texas. They were Komatsu and Hitachi. Both companies were headquartered and with manufacturing plants Japan. (I will submit a story later about the bidding war that took place for the sale of these machines).

After the purchase of these machines I contacted Leading Edge Attachments to get buckets manufactured for each of them. They had never made a bucket this large before. The ones for our Cat 385’s were the largest they had built to date. We had bought several buckets for them in varying widths.

LEA went to work making our buckets. By the time our EX 1200’s made the trip across the ocean and were each loaded onto five trucks at the Port and made the trip here, the buckets were also here.

After assembly and make ready was done with the first one we started digging. In 2 days we barely had enough ditch open for our first 20′ joint of 42″ Hobas Pipe.

I spent a couple of sleepless nights. I had just bought two machines that cost a million dollars each and purchased two Leading Edge Buckets at a price tag of around $80,000 each and they would not dig. On the third day I arrived at the job site to observe why we were digging less rock than our smaller 800 class machines had proven to do. I remember hunkering down on the side of the ditch as close as I dared to get to where the action was. Of course the friction of the metal contacting with the white limestone rock was causing so much smoke and dust it was hard to see what was happening.

Finally we determined that the single point Tiger Teeth were slightly more narrow than the bucket, causing the sides of the bucket to make contact rather than the digging teeth. That would be a simple fix, just put Twin Point Tiger Teeth on it and then we could start digging.

We called the manufacturer to tell them what was happening. They would investigate and get back to us. I remember my words. “What Do You Mean They Don’t Make A Twin Tiger Teeth That Large?”. I’m sure it was in a more elevated tone than normal.

The only Tiger Teeth that large were made in Spain. I suggested they had better start making a Twin Tiger very soon. I was told that it would take a few weeks for them to tool up to start producing them.

An honest mistake had been made when designing our new buckets. All the drawing and measurements had been up-scaled from the smaller buckets they had built previously. The tooth adapters were welded at the same degree of angle as those on the smaller sized buckets. But the smaller ones had a wider twin point tooth design.

We all got our heads together to find a temporary remedy. The most logical thing would be to take a new tooth, trim the side off with a torch and mate it up to another single tooth, put a good weld on it and then we had twin tigers. Leading Edge starting sending us crates of teeth at their expense.

There was a slight drawback to that. Those teeth were costing just over $1000 each. The rock was very abrasive, so we were changing teeth pretty often. It keep our welders busy retrofitting teeth for both machines. It gave the manufacture a great incentive to push on the tooth company to get those twin tigers built and shipped to us.

I had some reservations about whether we could weld the teeth and make them hold, under the extreme pressure we would put them under. I don’t think we ever broke a welded tooth. After a while we had used takeoffs that we could start cutting up, saving the cost of the new tooth that was going to be cut up anyway.

While that was a tedious situation to go through, we learned a lesson that we’ve used every since. Now we cut and retrofit teeth of all sizes to obtain the ditch width that we need. It’s much cheaper than buying so many different width buckets and we save on bedding material by customizing those widths to get exactly what we need. “And that bedding and trucking ain’t getting no cheaper”. 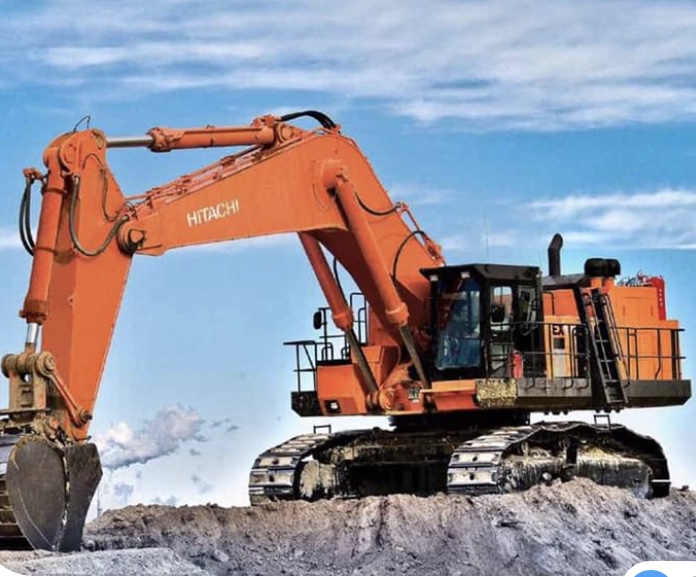 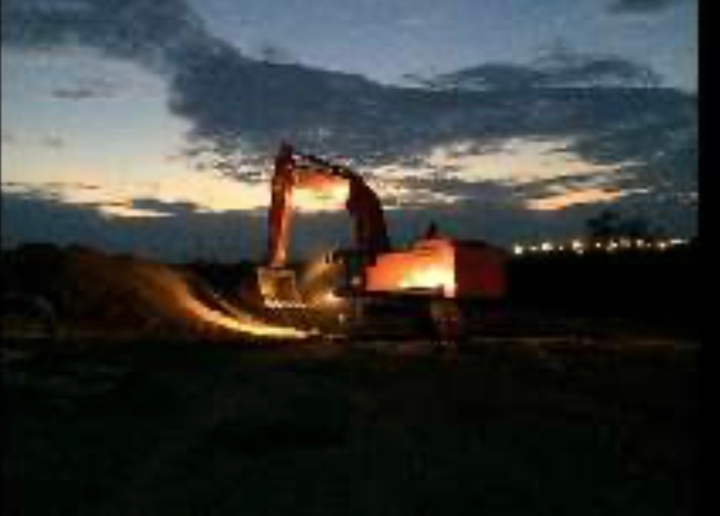 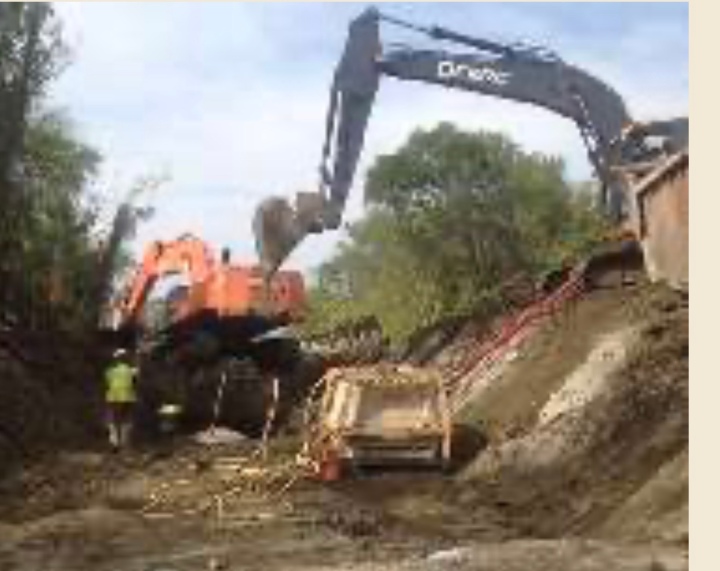 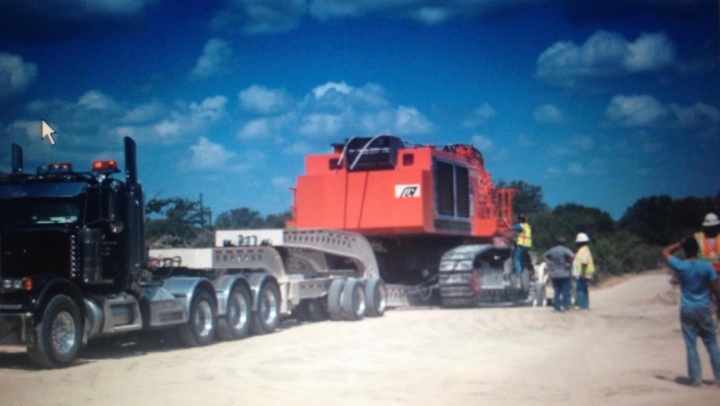 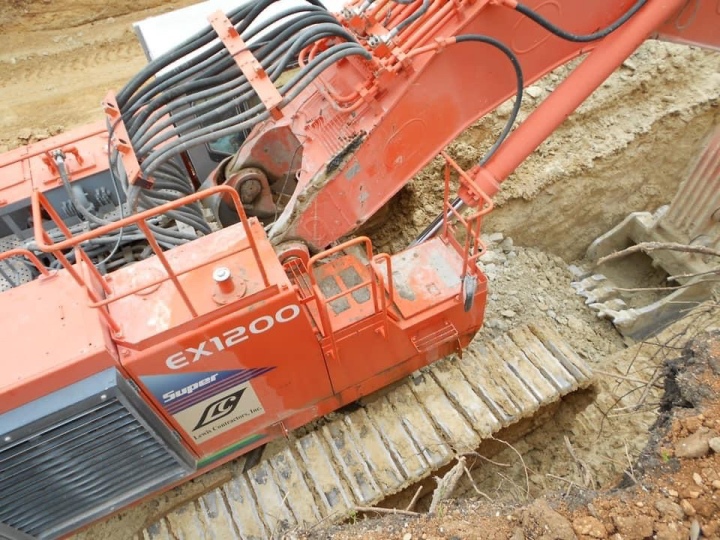 This last photo is a 3-photo collage of Leading Edge Buckets that we have leftover in the yard for the EX 1200’s. I’m not sure if many of you have used these buckets but they are truly phenomenal digging attachments. (I hope to do a post before long talking about the various backhoe buckets we’ve used over the years) 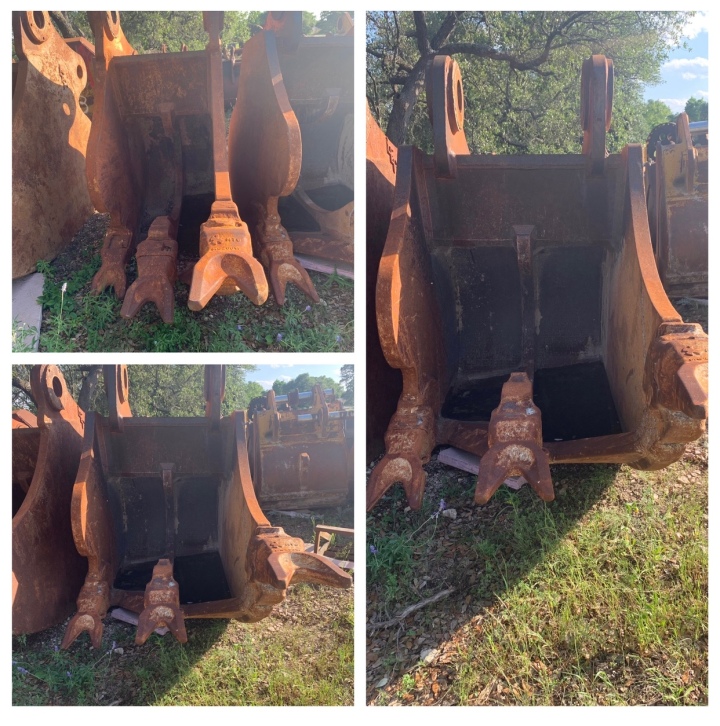 This is a link to a previous post showing one of them being delivered to a yard for storage, until it was eventually sold.

This link is a post I made recently showing a testimonial I made for Hitachi about the EX 1200’s.