Back in 1970, not too long after I graduated from high school, I was driving a truck for Nelson Lewis, hauling equipment all over the state.

I remember being dispatched to Devine, Texas to haul a Parsons Trencher from there over to Port Lavaca. It was a trip of around 200 miles, maybe more with weaving my way down through the many little south Texas towns. This was before any big highways were built. Those towns were connected with Farm to Market Roads and a few State Highways.

I got to Devine late in the afternoon one day, loaded the machine and chained it down. Early the next morning I pulled out of Devine. This was when a gas station road map was the best thing we had for directions. I don’t know what determined my route, it wasn’t like we called in and got a permit like we would today. We needed a permit, but I was told to not worry about it.

I sure didn’t know the best route from experience, as I’d never traveled that part of the state, other than riding in the backseat of a car on our way down to the coast when I was a kid.

With a leap of faith I took out, weaving and bobbing around as I went through town after town, with no escort, with no swamper. (another body to help you watch and get under power lines, etc.)

I can remember getting to a power line, putting the truck in the lowest gear, getting it slowly moving, standing on the running board with a long pole and bouncing a low live wire over that contraption, then moving on out.

Many times when getting into a small town it would be necessary to head down the wrong side of the street to pass under wires and miss dangling red lights. I would just take command of things and go. People moved out of the way. People were more courteous back in those days.

An occasional low hanging phone line drop to a house would have to go, not because I wanted to pull it down, but because it was too hard to see.

By the end of the day I had made it down to the coast and unloaded the machine. I had help loading the machine as there was a full crew in Devine. I was the only person on the other end.

How I knew what made it move is beyond me. Those things were notorious for falling over, being so top heavy. There are more levers and peddles on one of those things than ticks on an ole farm hound.

With it safe and sound on the ground, I was on my way back to Marble Falls before dark. Probably arriving and safe and in bed by midnight. That is if I had the good sense to go home when I got back to town.

To talk about it being a different time we lived in in those days would be such an understatement. It was more about getting things done than worrying about details.

In my wildest dreams now, I can’t imagine sending a truck off on a run like that without several people going along to accompany.

But to send an 18 year old kid, alone, to do that is something even I call into question.

I would have a hard time sending an 18 year old kid nowadays to Devine to haul a bucket of bolts to Port Lavaca.

I guess with my upbringing, it’s always been hard to listen to someone making excuses as to why they can’t make things happen.

Maybe it’s caused me to expect more from people than they can deliver. I’m not sure which it is.

Yes, it was a simpler time, is all I can tell myself.

I didn’t have a tape measure with me back then. It was only later that I figured out that the Parsons Trencher on that lowboy was just under 19 feet tall. 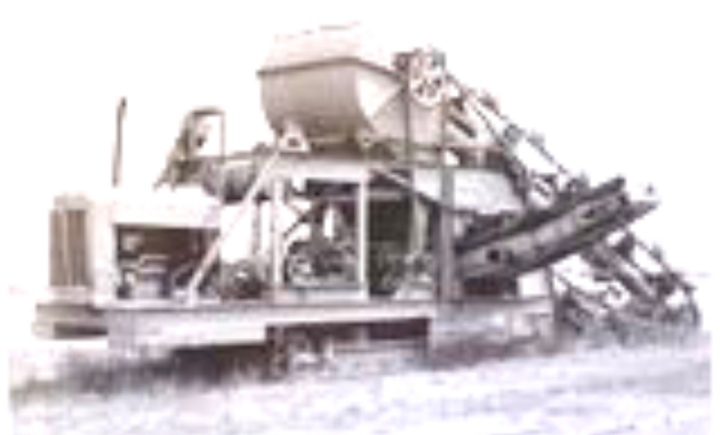