Madeline and I had traveled to Acapulco, Mexico for a getaway in the late 1970’s.

It was enjoyable and we wanted to go back. So we convinced my parents, Bonnie and Cecil, to go with us. It wasn’t an easy decision to make. One never knew how well Cecil Lewis would travel and adapt to various situations away from Smithwick.

Once we got there we wanted to make the most of the trip and do something memorable for them. We lined up a parasailing ride for Bonnie Gay. She was extremely proud that she had tried it. Madeline took pictures, but then discover the film wasn’t loaded correctly. So she gladly went for a second round. The pictures turned out great that time.

Cec didn’t do it. However when we returned home from the trip he went directly to the Army Surplus store in Lampasas and bought a parachute (Just a regular one – Not one made for parasailing – There is a difference) With a regular military parachute, if you were lucky enough to get it airborne, it almost assuredly would get up to a pretty good height then dive bomb into the water below. Poor ol’ Virgil Lackey, a Smithwick resident back in those days could attest to it not being a safe practice to let Cecil Lewis strap you in a parachute and take off pulling you behind a boat. I never witnessed it in action, thank heavens. By the time I showed up to the lake, the parasailing Smithwick style was but a painful memory.

The trip had several memorable events. Cecil didn’t travel so well as it turned out. He was known to over-indulge in drink if he was suppose to be having a good time. This trip was no different.

The highlight of the trip was a deep sea charter, fishing for sailfish. As we prepared to head out that morning, we went to get box lunches to take along. With my phobia about eating in Mexico (from a trip made there soon after Madeline and I married, which is a whole other story) we found a Colonel Sanders Kentucky Fried Chicken on our way to the docks. Figuring if the Colonel fixed it, I wouldn’t end up with dysentery so I went with it.

We got out far enough to catch a big sailfish, but could still see land. It wasn’t an experience like I’d ever been on when fishing off the coast of Texas. The boat was old and very antiquated. The crew was sizable. There was the Captain and crew of about six. Then the four of us. We trolled back and forth several times. They told us it may take a while to get on the sailfish.

We finally something hit something on one of the lines. They could tell it wasn’t a sailfish. They finally brought a very large turtle onboard. They stuck it up in the front of the boat.

Later the boat came to a stop and we were told it was time to eat. As we started to eat our chicken, they brought the turtle out on deck, not far from where we were eating. One of the deckhands took a large knife and cut its throat and bled it out in a couple of large plastic cups. All of the crew started passing the cups from one to the other, drinking the warm thick blood.

I did my own brand of chumming over the side of the boat. I feel sure if the others in our party of four didn’t, they weren’t far from it.

With lunch over with, the trolling resumed. Almost immediately Bonnie Gay and I both hooked up at almost the same time. Mine was made easy as the line wrapped around it’s tail and it mostly laid there as I powered winched it in.

Bonnie Gay’s fought and she stayed with it. I’m not sure how long it took for her to land it, but she enjoyed every minute of it.

Once we were back at the dock, there was frenzy of men wanting to be the one that got our business to taxidermy our two fish. Finally one fellow prevailed and a deal was struck. I gave him about $600 dollars and we swapped information.

Over the next few months I made several phone calls trying to find out about the fish. I had misunderstood our original conversation, he would need more money to finish the work. I almost called a halt to it, but decided that my mother was so thrilled about her catch, that I didn’t want to disappoint her so I wired the additional funds.

A while later I got a notice from the guy saying the fish were ready to ship. But he needed more money to crate and ship them. Once again I had misunderstood. So I sent more money. A few days later I got a call from Continental Airlines that I had 2 large packages at the Austin Airport that were ready to be picked up. I had waited so long and paid so much I hurried out to pick them up.

I got to the airport, to find out the shipment has been sent COD. More money was needed to get the fish. Knowing this was the end of it, I gladly paid the money and took the two big crates back to the office so we could finally see the finished pieces.

They looked good, but then I discovered that it was just 2 big chunks of plaster of paris with the fin being cut from a piece of masonite. All painted up. The only thing that could have been from the fish was the long bill, but I even questioned that.

Bonnie Gay proudly displayed her fish in her home. I think my fish may have stayed crated. I didn’t need to have it on constant display to remind me of what a chump I’d been.

This is a photo I found that shows the Sailfish on her wall. This is Nonie and the Twins, Jason & Justin posing together. 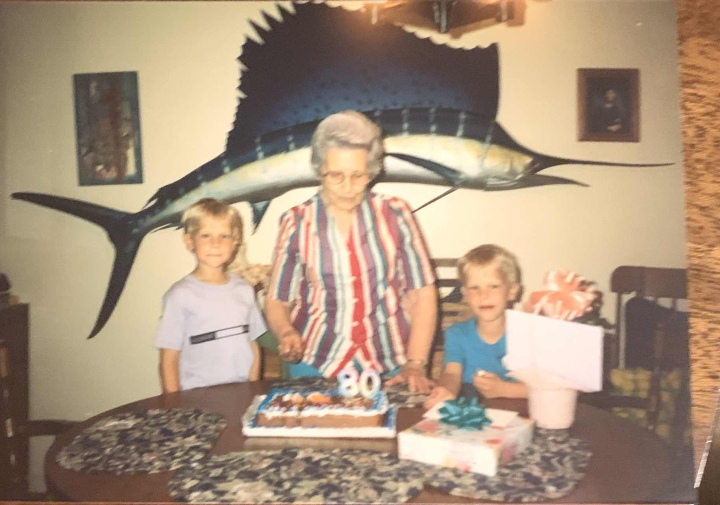