I went out to Las Vegas in about 1982 or 1983 to Con-Ex-Po. That is a trade show for machines and equipment in the construction and mining industries. You can see the biggest machines and all the newest innovations known to man. Anyone in my business will walk around in awe at some of the things you see.

Nothing caught my attention more than a fellow at one booth that was cutting really thick slabs of metal. He was slicing through 2″ & 3″ thick pieces of steel like any one I’d ever seen before cut 1/2″ metal. It was truly unbelievable. His cuts were beautiful, like a knife through butter.

I had to have one of those cutting rigs for my guys back in Texas. I was a little concerned when I figured out that it was made to burn regular gasoline, instead of acetylene. Something about mixing pure oxygen and gasoline right in a man hand didn’t strike me as they most prudent thing to do.

I got over my fears and bought one. Or rather I ordered one that was delivered a few days after I returned to Austin. When I explained it to my guys they looked at it and at me with a lot of skepticism. They finally hooked it up and tried it. I think they checked to see that their life insurance was paid up first.

That torch stayed around through two generations of welders in the company. For some reason it never was used much. I think the old pros just never could get passed their fear of dying.

This is the torch setup like I purchased. The red vessel is what you filled with gasoline. The price back then was around $1,200. A huge sum it seemed like back, 35 years ago. 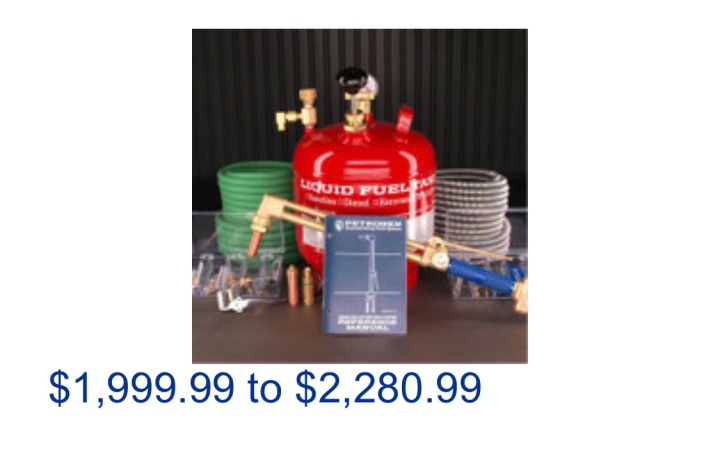