Brown Parker and wife Eula moved back to Texas after spending 3 decades or so out in California, to a couple of acres down on our old home place on the hill overlooking the Lake.

He went up to Marble Falls and bought a building that needed to be moved. He set it up on stilts the way it had been in town, so it would improve his view. Many of you may remember this building. In the earlier 60s it was a snack bar that Mr. Seals and Mr. Hill had built at the mini-golf place.

To have water he called Morgan Wright Well Drilling from Burnet to put the well down. They drilled about as deep as they dared to. It wasn’t showing signs of a very good well. My Dad, Cecil, went up to the house and got a bunch of dynamite and other paraphernalia and returned. He always kept a little dynamite around just in case he needed to blow up something.

He had done this procedure on wells before with pretty good results. Just lower a little charge down to the bottom of the hole and set it off. If there was any water at all, the explosives would fracture the rock and it would flow better.

Cec had a lot of explosive experience. He even once did the blasting beside and up under the Texas Capitol Building for an expansion project.

Dynamite is pretty dang explosive but if it has some ammonia nitrate fertilizer mixed with diesel fuel, you are gonna really get some bang for your buck.

When he got back there that day he had all the ingredients to rock someone’s world. He found an old innertube, not sure what it was from. It was bigger than a bicycle tube but smaller than a car tube.

He filled the tube full of dynamite, fertilizer and a blasting cap and then tied the ends off real good. He had a tube of pookey of some sort that helped seal it up to keep any water out. He found a couple of honeycomb rocks to use for weights and tied them on and lowered the whole thing to the bottom with a long rope and the wire to spark the cap with.

I’m not sure what it’s called but there is a thick walled piece of pipe with a big plate welded around it, that’s planted at the very top and the drilling takes place down through this apparatus. This is so when the drilling starts the very top of the ground doesn’t try to fall in. That piece was left in place because they would need to go in after the blasting and clean out the hole a final time.

The drill rig, a huge thing for drilling water wells would have looked more at home in the oilfield. It was brand spanking new Gardner-Denver rig with 2 front axles and 2 rear axles. It was pulled way up out of the way. Plenty far to keep it from getting dirty if a little mud and water came shooting out of the hole. 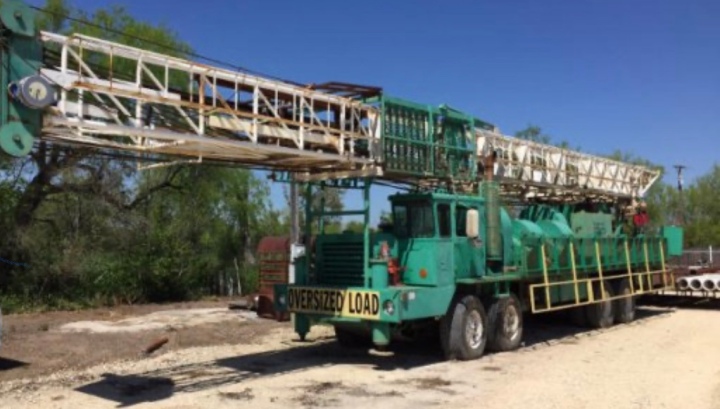 There was a lot of excitement in the air. If you were a walking, talking, breathing male in Smithwick and had heard about shooting Browns well, you were there.

With everything in place Cec pushed the plunger handle down on the detonator box just after he hollered “fire in the hole“.

Living in Texas, I’m not sure any of us had ever been through an earthquake. Maybe Brown had, living in southern California for years. But that’s what we had. The Smithwick Earthquake.

To everyone’s astonishment the big steel pipe piece that had previously been stuck in the ground was now launched straight up in the air. There were many estimates on how far it went up – from several hundred feet to a mile.

I remember watching it, like it was all happening in slow motion. The thing was a very tiny speck in the sky and it got larger and larger as it came back to earth.

I think everyone there held their breath the entire time. It looked like it was headed dead center of the new drill rig, with it’s massive power plant and giant air compressor. When it finally hit the ground it was no more than 4 or 5 feet from the edge of the truck.

There were rocks, gravel and mud that rained down on all of us. Luckily no one was hurt.

They backed the drill truck up and centered it over the hole and started back in to clean it out the well. My best guess is that there is a hole down there big enough to put a house in. That well only produced enough water to supply that one house if they didn’t shower too long.

For whatever reason (some blamed it on over blasting) Brown couldn’t mix it with Jack Daniels Whiskey. When he did it turned black. Brown would carry jugs up to our house to get water for that purpose.

Cecil Lewis always did over do things a little.